This year’s International Day of Struggle of the Working was celebrated in many parts of Austria with powerful red expression. The fact that on May Day internationalism is in the foreground and, as Friedrich Engels wrote, the workers of all countries „are united in the deed“, found strong expression also in Austria. Large blocks, some of them the largest in each case, at the demonstrations in Vienna, Linz and Innsbruck were formed in unity by Austrian and Turkish-Kurdish revolutionaries, left a strong impression and showed that the upsurge of the workers‘ and people’s movement in Austria also finds expression in the organized strength of the working class.

That May Day as a day of internationalism was shown, among other things, in actions of international solidarity carried out in various cities with the struggle of poor peasants in Brazil. „No criminalization of the revolutionary peasant movement“ could be read on banners, as well as „Long live the LCP“. The LCP is the „League of Poor Peasants“ in Brazil. It is currently trying to prevent a planned massacre of the poor peasants‘ movement in Western Amazonia and is supported in many countries. The fact that so many different people in Austria understand and defend the struggle of the peasants in Brazil as part of their struggle is particularly remarkable, since Brazil is a country that is usually only mentioned in the sports news by the bourgeois media.

Another sign of international solidarity of the working class we could see in Vienna. During a minute of commemoration for the fallen and deceased comrade at the end of the demonstration, the flag of the local „Partija Rada“ (Party of Labor) was held high in memory of the deceased comrade Feliks from Serbia. His memory and his deeds for the workers‘ and people’s movement, are firmly anchored in the hearts of the workers and the peoples of the Balkans, Central and Eastern Europe.

In the run-up to May Day, sprays were used in various cities, mostly in residential and working-class neighborhoods, to mobilize for the causes of the demonstrations.

After the previous May Day, which was also held during the pandemic, had to be enforced in a tough struggle and ultimately took place victoriously everywhere, this year, above all, a broad dynamic of demonstrations could be noted. The marches were better attended in almost all cities than last year, and it was remarkable that especially the revolutionary forces had a quantitatively stronger expression on this May Day than ever before since we have been journalistically accompanying the international working class‘ day of struggle. At various demonstrations, red forces pointed out the necessity of the revolutionary organization of the working class: „Build the revolutionary organization of the working class“ could be read on banners, slogans like „Break the chains of reaction, with strength and courage for revolution!“ were shouted. Signs commemorating historic anniversaries of certain achievements of the international workers‘ movement were also carried. They read, for example, „Long live the 100th anniversary of the founding of the Communist Party of China“ or „150 years of the Paris Commune.“ That the unity of workers under revolutionary leadership is also forged in practice was confirmed in a conversation with a worker at the demonstration in Vienna, who reported that shortly before May Day the first meeting of a newly founded workers‘ regulars‘ table took place, whose participants unitedly took part in the internationalist march on May Day.

After the SPÖ (Social-Democratic Party of Austria) completely capitulated on May 1st last year and the People’s Committee „Self-Determined Austria“ in Vienna organized a successful rally on Rathausplatz, this year the SPÖ did everything in its power to prevent such a defeat of social democracy once again. The square was made inaccessible by bureaucratic methods. Despite these circumstances, once again a rally of the Alliance could be held and only a few meters away from the Town Hall Square a successful action for the defense of the democratic and social rights of the people was held. In the sign of internationalism the solidarity with the anti-fascist forces in Ukraine was emphasized here. The fact that this alliance of various progressive forces has gained strength in the last year was expressed, among other things, in the presence of the campaign for raising unemployment benefits to 80%, which in recent months has intensified its activities in many different federal states. This was also evident, for example, at the May demonstration in Tyrol, where the campaign carried its own banner.

This year’s International Working Class‘ Day of Struggle came to a close with joint festivities and celebrations. As we can report from Vienna, at a picnic of red forces the diverse composition of the visitors was particularly remarkable. In addition to families and very young people, many older comrades also took part. They were united in the firm conviction that the intensified attacks of the rulers make a close union of the oppressed urgently necessary. Here, too, solidarity with the LCP was spread. In Linz, the capital of Upper Austria, where the clear stance on the issue of MAN in Steyr played an important role in the demonstrations, a meeting of various revolutionary forces took place in a park after the march, which was also attended by local residents and families.

The broad dynamics and strength of the May Day demonstrations this year were obviously a thorn in the side of the rulers, especially in Vienna. Despite the traditionally peaceful course of the marches, the rulers mobilized a large number of repressive forces, which had already provided harassment throughout the day, even against social democratic passersby. A heavy police presence was used to try to intimidate the internationalist May Day demonstration in Vienna, and a few hours later the police sneakily attacked the final rally of the „May Day“ demonstration in Votivpark. In addition to political activists, families who were picnicking and even children and pregnant women were attacked with pepper spray and forcibly evicted from the square. This is a deeply despicable attack on May Day, which should spur all progressive and democratic forces even more to stand firmly together and defend the justified concerns of the working class and the masses!

This diverse and fierce May Day 2021 powerfully expressed the successful struggles of the past year and summarized them on many important issues. The strong expression of internationalism on this May Day, which was especially represented by the revolutionary red forces, shows that the most progressive sections of the working class in Austria are increasingly developing as part of the international struggle of the working class and oppressed masses. On this basis, they will certainly be able to take further large and firm steps next year. 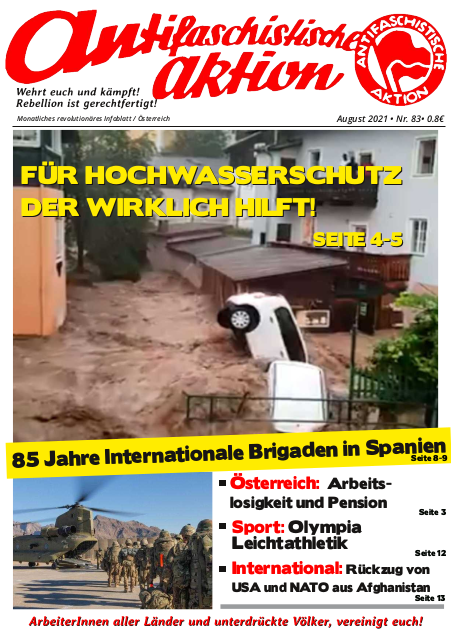