The 1st of May 2020 had to take place under very complicated conditions, not only in Austria but worldwide. In numerous countries, the rulers attacked the international day of struggle and celebration of the working class under the pretext of „health risk“, which was allegedly given by demonstrations and rallies. But in many countries, workers and members of the people from different parts of the masses presented that they will not allow to miss the 1st of May, that it is precisely when democratic rights and labor rights are under severe attack that militarization and fascization are further promoted it is all the more important to keep this day high and to defend the content it stands for.

It was the same in Austria. In large parts of the federal territory there were numerous demonstrations, rallies and actions in defense of the 1st of May! A total of thousands showed that they are not intimidated, that they exercise their rights and the struggle for their interests and goals in a self-organized manner while maintaining their health. These demonstrations, rallies and actions were a great expression of the defense of the 1st of May and will continue to be exemplary in the future. Attempts were made to criminalize, intimidate and suppress the 1st of May, but failed because a broad front of organizations and activists persisted in enforcing this important day. While it was still uncertain two weeks ago whether and how anything could take place, the 1st of May 2020 has now become a great victory for the workers and the masses! We want to report on this great event in more detail and therefore put together a report that should not only give a picture of many of these demonstrations and rallies, but should also show, if possible, what happened before the 1st of May and apart from the big demonstrations and rallies.

In preparation and mobilization of the 1st of May
Before the 1st of May, the news that the international struggle and celebration of the working class is under threat and that it is not certain how it can be held this year was spread in many self-organized solidarity actions, in discussions with colleagues, in the Neighborhood, etc. Many people were outraged, so they wanted to express their needs and demands in advance. We became aware of some of these actions, mostly with signs, and asked people to send us pictures. In addition, readers of our information sheet noticed various combative sprays in various places in Austria in before of the 1st of May, and we want to document them here too. 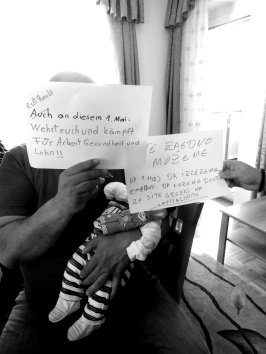 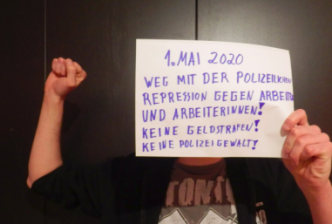 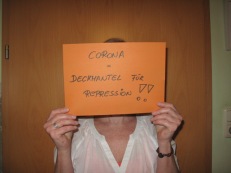 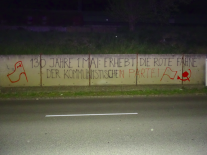 1st of May in demonstrations and rallies.
The numerous demonstrations, which were held in Innsbruck, Linz, Graz and Vienna, provided a captivating and sensational picture. At times the participation was extremely high, for example in Innsbruck, where with 750 participants, there were only slightly fewer people than it is usually the case! Revolutionary and antifascist activists brought important and powerful expressions into the actions almost everywhere. In Vienna, for example, the slogan was: “Team Austria is hypocrisy! Out, out for the 1st of May!” hailed by the whole demonstration. After the Social Democratic Party canceled its activities on the 1st of May, many members in Vienna were disappointed and some were really angry, because „now the 1st of May is needed“. Some members of the Social Democrats and trade unions, despite the capitulation of their organizations, did not miss the opportunity to take a look at the ring road (“Ringstraße”, Street in the City of Vienna), were then positively surprised by the combative and large-scale demonstration – which was completely concealed by the bourgeois media – and subsequently took part in it. According to our observations, the mood at the demonstration was better than last year, which is certainly not least due to the fact that the participants were very optimistic and delighted with what they achieved by enforcing this demonstration against all capitulations and misdeeds . Hence the very unanimous opinion: „Capitalists should pay for the crisis!“ In Upper Austria, Friedrich Engels was also commemorated at the central May Day rally in Linz, under whose leadership 130 years ago the 1st of May was implemented as an international struggle and celebration of the working class. Demands for raising the unemployment benefit to 80% and resolute spirit of struggle against the attacks on collective labour agreements and workers‘ rights, as well as for the massive expansion of the public health system, were there (as in other federal states as well) massively picked up slogans and demands. In Upper Austria, in particular, there were numerous provocations and attempts to intimidate the authorities, whereby the activists were not deterred by the rally and at the end of the campaign, all participants in the rally spontaneously striking the “Internationale”! Before the demonstration in Vienna there was also a rally organized by the committee „Self-determined Austria“, which was also well attended and attracted international media attention. 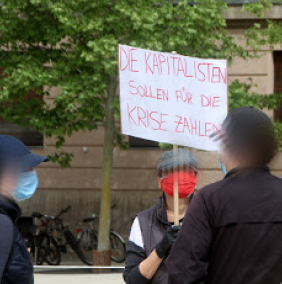 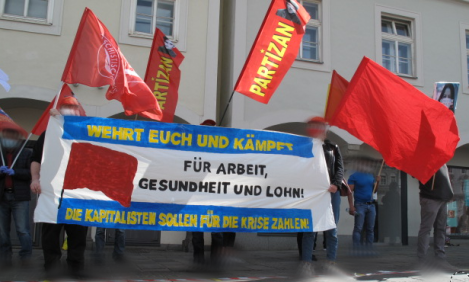 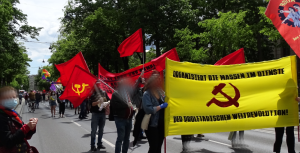 „… Workers, farmers, we are …“ (The International)
Of course, given the complicated conditions this year, it was almost impossible for many people from rural and small-town regions who wanted to struggle for the content and goals of the 1st of May, to take part in the demonstrations and rallies in the cities. Therefore, some of our readers set out to defend and keep the 1st of May on their own initiative. In addition to some self-organized campaigns in rural areas, numerous red flags were attached or used as an expression of rebellion and protest. 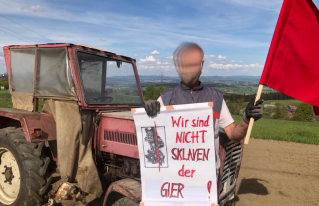 But even in the cities, of course, not everyone was able to celebrate May 1st in the usual way, for example because they belong to the high-risk group due to their age or previous illness. Nevertheless, these readers also got creative in expressing their demands. We do not want to queue to publish these mailings:

Those workers who work in what are now often called as „systemically relevant“ branches, such as health care, logistics and trade (where there is also work on the holiday), were able to participate only with difficulty or not at all. We see that the rebellion is increasing in these factories in particular, because it was precisely these workers who often had to work without proper health protection, who had to do a lot more work, etc. These colleagues raised some of their demands from their workplaces . There was also a greeting on the first of May at the company Greiner in Linz, where one of the earliest „corona strikes“ took place in Europe.

In the neighborhoods and parks
In the residential areas of the cities we were able to report many self-organized, solidarity campaigns for the health care of the people even during the initial restrictions. These developments apparently continued in several Austrian cities on the 1st of May, with revolutionary forces and anti-fascist activists holding spontaneous rallies and small demonstrations, organizing cultural events with music and a festive get-together in the district, with short speeches (sometimes with a megaphone) on the history and importance of the 1st of May and the international workers movement were held. In a park, a local said to one of the activists: “When I heard voices through a loudspeaker through my window, I went straight into the park because I knew that you were there. It is good that you are coming to us in the park on the 1st of May. That pleases me very much! I hope you will come back soon! „ 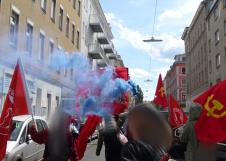 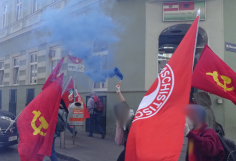 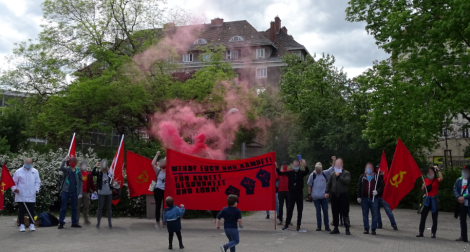 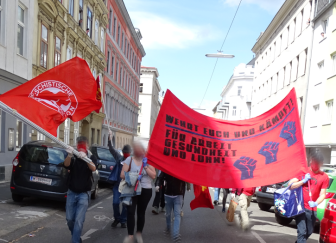 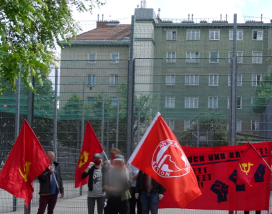 It was the most expressive 1st of May that we have been able to follow in Austria with our reporting. We hope we were able to give our readers a good picture. In the near future it will become even clearer that the rulers aggressively want to dump the cost of the current crisis on the shoulders of the masses. Unemployment, tax increases, stagnating wages and the healthcare system will continue to be cutted. We therefore also hope that our report could motivate you to take part in demonstrations and campaigns against it in the near future and to fight shoulder to shoulder against the shifting of the burden of the crisis onto the masses. It was a powerful 1st of May that prepared a lot of people for that. All attacks on May 1st failed and it was evident that capitulation is not an option for the struggling forces of the workers movement in Austria. It was a great 1st of May for the workers and masses in Austria. It will not be the last, many will follow in this spirit! With this, the workers, the masses, sent a combative signal to the world, a confident internationalist message. Such were also to be seen at all demonstrations and rallies in the form of signs or banners on which it said: „Long live proletarian internationalism!“ Or: „Organize the masses in the service of the proletarian world revolution!“

Hold high the 1st of May 2020!
Resist and Combat: For work, health and wages!
The capitalists should pay for the crisis!
Long live internationalism!