„Down with Patriarchy and Imperialism!“

Report about the 8th of March in Austria:

Besides the international meaning and the meaning of the 8th of March for the women‘s struggle in the rows of the Revolution, March 8th this year in Austria stood in a row with the Antifascist Protests against the new government, the most aggressive representatives of the ruling class.

The Antifascist Demonstrations of the last few months already had a strong participation of women. Especially the women in the rows of the struggling Anti-fascism expressed their fury and determination to struggle! It was clear to see on March 8th, that this uprising of the mass movement had brought a new dynamic to the development of the women’s movement.

In Vienna two demonstrations were held, in which 2000 women participated. It was especially noticeable that a lot of migrant women, particularly Muslim women took part and demonstrated against racist laws like the headscarf ban. The Red Women‘s Committee Vienna in particular was noticeable with their loud shouted paroles, mostly with the parole „Proletarian Feminism for Communism!“. One activist has reported us, that they were able to make important steps for their work in the future. The activists had apparently distributed hundreds of posters in the mobilization period already.

The spirit from the protests against the government was also mirrored in the demonstration in Linz, which became a struggling expression, even within an artistic pretension. The attention was on the attacks on women’s initiatives and associations in the form of the massive backing cuts by the federal state government. About 500 people took part, which shows an increase compared to last year. The women of the Red Women‘s Committee carried a banner saying „Down with Patriarchy and Imperialism!“ and pictures of the female communists, who are stated in the statement of the women committee. One activist of the Red Women‘s Committee said: „It‘s a shame that with such a serious and important campaign like on March 8th, with its international meaning but also its recent connotations in Austria, where women are more and more getting under the wheels of really reactionary, fascist politics, more art than politics are made. But it was really good, that even more women than last year have found themselves clearly in the rows of the Revolution! This was very important for us, because it showed us that we have come one step further in the realization of our goals, as defined in the Document for the day against violence against women“.

Also activists from the Solidarwerkstatt and the association Maiz contributed to a struggling spirit. The women from Maiz showed, that they will not be scared by the backing cuts (we reported in the AfA43) and brought their demands on the streets!

This year in Linz there was support from activists from Salzburg. You can look up the reasons for the unusual mobilization from Salzburg (usually there is a independent demonstration) here: infoladensalzburg.wordpress.com

In Innsbruck also, more people than last year came to the demonstration. One activist estimated the number of protesters to be about 400. It was a good and struggling spirit, accompanied by loud paroles, a lot of lags and signs. Especially the banner „Down with Patriarchy and Imperialism!“ apparently got very good reactions from protesters and passers-by. Also Anti-racist signs came to attention.

The women in the demonstrations on March 8th, especially those who struggle in the rows of the revolutionaries, those who defend proletarian feminism, have attacked the pseudo-theory of the „inferior female nature“ and showed that they are ready the struggle against the patriarchy and Imperialism. With paroles, signs and pictures, the international character of this struggle against Imperialism and the patriarchy was rightfully came to the fore. Although there are a few points to critique that were lacking, March 8th in general was very good for the Austrian women’s movement, because activists reported that they were able to make important steps forward or confirm them for their work in the future.

The women showed that they‘re not weak, apolitical or silent. The opposite is the case! They struggled for emancipation and they know, that the emancipation of women can only be the work of the women themselves!

Unleash the fury of the women as a mighty weapon for the revolution! Establish Red Women’s Committees!

Down with Patriarchy and Imperialism! 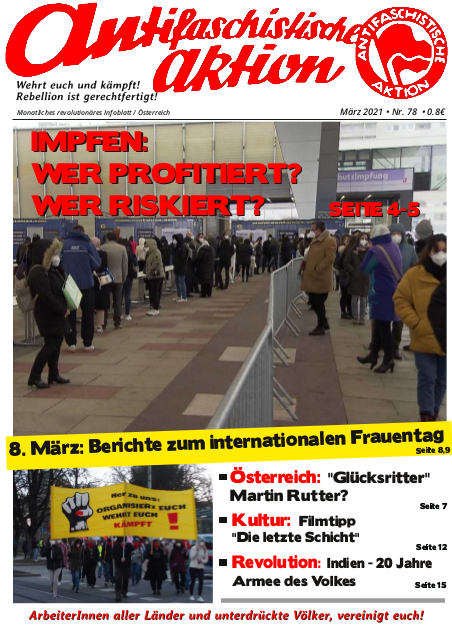