Upper Austria has been the place, where the ÖVP/FPÖ (People’s Party, Freedom Party) government has tried to push their anti-democratic attacks, like for example cutbacks in minimum security unemployment benefits, tuition fees, politics to make women stay at home (child care, cutting of different women organisations),for over a year now. This led to huge demonstrations with a total of over 10.000 demonstrators.

The initiative „Stahlstadt gegen Faschismus“ (steel-town against fascism), together with the “Antifascist Action” and the “Solidarwerkstatt”, also took part in the demonstration. Opposite to the planned “taking a walk” by „Linz gegen Rechts“ (“Linz against the right”), this block brought a struggling expression into the demonstration. Because of the determined appearance by the anti-fascists, many demonstrators joined the block and actively took part in shouting the slogans. Not only the slogans, but also the compound of the block showed its internationalist character. An especially great participation came from demonstrators of Afghanistan, Syria and Iraq. The demonstration was also used to take part the international campaign to free G.N. Saibaba and all political prisoners in India.

Especially the big participation of women in this block, against the patriarchal Rulers, trough a self confident, loud and struggling appearance has to be pointed out.

The last demonstrations have shown to us, that huge parts of the masses don’t let themselves get blinded by the reformist organizers of the demonstration. The struggle against ÖVP/FPÖ government (People’s Party, Freedom Party) is justified, but it needs to go further. In the near past victories had been achieved in Linz, whenever the anti-fascist movement trusted in their own power and did not rest on one single victory, but has to bring the protest forward – organizing the masses and creating a more and more stable base for struggling antifascism!

Down with the capital!
Down with ÖVP/FPÖ (People’s Party, Freedom Party)!
Forward with struggling antifascism!
Death to Fascism, freedom to the people! 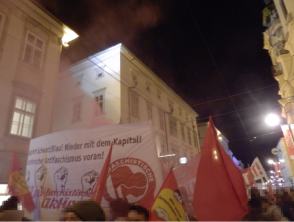